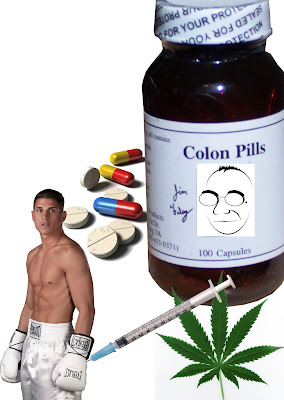 “Leadership is oftentimes doing what is not easy…”


That’s the line spewed from the piehole of cheating boxer Joey Gilbert. Nice try Joe but we aren’t buying it. Earlier this week the Nevada Athletic Commission dismissed charges of Gilbert being on amphetamines, oxazepam, diazepam, nordizepam and methamphetamine after a bout last year. YIKES! That sounds like the same ingredients in our old chemistry set.


“But the commission dropped the charges,” you say. Yup. THOSE charges. The one that wasn’t dropped was the charge that he was on steroids. No argument there. You see, at the beginning of Gilbert’s hearing, he (and his lawyer) proposed a settlement in which all but the steroid charge would be dropped. That’s right. Gilbert wanted to settle and he was gonna cop to ‘roidin’ to get it. No such luck. The NAC gave Gilbert a one year suspension (with time served) fined him 10k and still hold the ‘roid charge against him.


Here’s the crux of this biscuit. Just because Gilbert says he “feels vindicated” doesn’t make it true. It’s like the old line from Joseph Goebbels that says: “If you say a lie over and over, pretty soon it becomes the truth.” The Bush-Wipe administration has been doing that to us for almost eight years.


No Joe…you got busted for ‘roidin’ plain and simple. You’re a cheater. You’ll now go down in history with the likes of Roger Clemens, Floyd Landis and 90% of the riders in the Tour De France, any former East German female Olympic athlete, the Chinese women’s gymnastic team former senator John Edwards and skeevy BillC.
No, you didn’t show leadership Joey…you took the easy way out...you cheated.
(8.-)
Posted by pj Connolly at 12:15 PM No comments: Links to this post