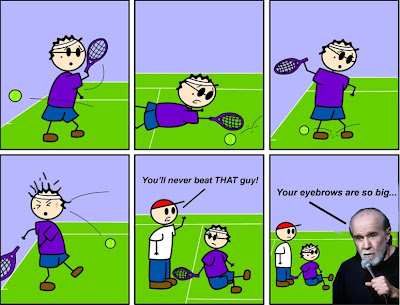 Why is it O.K. for the United States to torture “enemy combatants” in Gitmo, but it’s not O.K. for our enemies to torture our guys when they get captured? Oh, I know. It’s the same reason Los Angeles Dodger fans booed the hell outta Barry Bonds when they found out he was a steroid-abusing cheater but gave Manny Ramirez a standing ovation for the same thing. Torture sure is a fucked up thing…but at least, it’s OUR torture. Aye caramba!

Now that Blackwater is back in the news ‘cause its founder is a friggin’ BSC motherhubbard, I started to wonder. Remember back in the day, if you were in the armed forces and you messed up, they’d make you peel potatoes? It was called K.P. Well, it seems that you can’t go all Gomer Pyle on a dumbass nowadays ‘cause the United States Government pays Blackwater to peel potatoes, do laundry and dig latrines. Did you know that digging shit-holes for Blackwater gets you TEN TIMES the pay rate of the poor dogfaces getting their asses blown off? Remember when war profiteering was a bad thing?

Now, I really don’t want to start off the week on a bummer note (a different tack from the usual Mondays, I know.). So, I’m gonna play a couple of sets of “Vilification Tennis”…here goes…


"Your momma is so hairy, when she takes her clothes off, PETA throws red paint on her!"


Not a bad start to the week, neh?