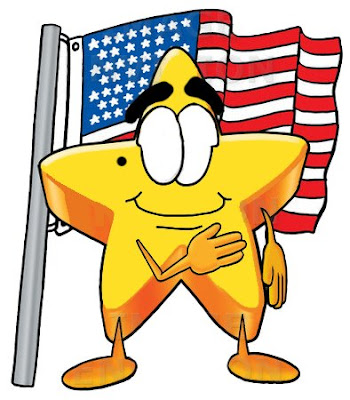 Some call it the “forgotten holiday” but here at PTB, we love us some Flag Day! Yesterday, while enjoying a celebratory case of beer in honor of F.D., we were perusing the RGJ and nearly skidmarked our Underoos when we saw the pic, on page 1D. What, you say, was so bad that would lead to such a knee-jerk response? Two words – Flag. Ties. Aye caramba!

Back in the ‘90’s, The Newtster and his posse rolled out the “Contract With America.” It was a misogynistic, homophobic, xenophobic manifesto that propelled the far right to the halls of power. We’re still trying to recover from that fiasco. But that’s the crux of another biscuit.

One of the highlights of the tome, was a proposed constitutional amendment that would ban flag burning. Yeah, right. Like Newt Gingrich and his ilk are smarter than Jefferson, Franklin, Madison and the rest of our old-skewl motherhubbards. Not. It seemed like the republicans were more interested in protecting the U.S. flag from desecration than they were in protecting the Constitution from ill-advised amendments from BSC politicians.

But the far-right has wrapped itself in the S&S and proclaimed that anyone with different flag-related ideas was a commie-pinko, a terrorist, or worse – a Frenchman! Remember how they vilified Barry-O for not wearing a flag pin? Well…we’ve got news for the tighty-righties out there…y’all are wrong.

Section 8d of the U.S. Flag Code reads: "The flag should never be used as wearing apparel.” Yes, peoples, we do own a copy of the U.S. Flag Code. That’s how civics geeks roll. That means no flag pins for politicians, no flag patches for the PoPo and no flag ties for the unwashed (and un-educated) masses. Isn’t it ironic that the same people who swear to uphold the constitution are the same ones wanting to amend it for political gain – all while wearing the flag like it was a red white and blue corsage? Douchebags.

So, from us here at PTB...Happy belated Flag Day everyone…not that y’all needed any remindin’.