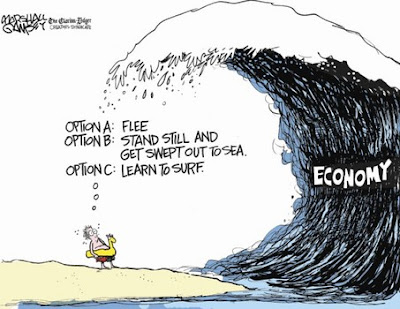 If anyone wonders why trust in American news organizations and journalists is at an all-time low, look no further than the stories in the last 12 hours about the tsunami that hit American Samoa. More than three-quarters of the stories I read referred to it as a “tidal wave.” Do you wonder if we trail most of the rest of the industrialized world in math and science? There’s the proof.

Speaking of H20…neighbors of George H.W. Bush honored him today by giving him a Navy anchor and a plaque. They say it’s a way to thank Bush for his service as president and for being a good neighbor. Gee, I thought the anchor was a metaphor for what his chimp-dick of a son did to the economy, our standing in the world, to our armed forces, to poor people and to everyone not related to a big-time bank, insurance company or lobbying firm. WPE sunk us all and now we risk sleeping with the fishes.


And finally, closer to home. The U.S. Census Bureau just released a report on how Nevada spent money during the time before the recession (can anyone remember back that far?). It said that when the Silver State was flush with cash, they didn’t save it, they spent it. They didn’t spend it on the poor…or on education…or the sick…or the elderly. Nope. When Nevada had lots of tax money they spent it on...more cops. Aye caramba! That’s the Nevada spirit. It’s what we’ve always needed…more jackbooted, fascist thugs patrolling our roads and parks and buildings looking for shopkeepers selling alcohol to elderly looking 20-year-old decoys and bustin' burners for smokin' the sticky-icky. What a waste.