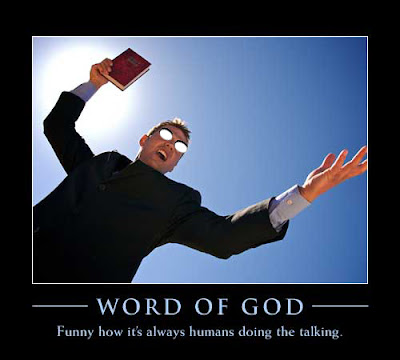 When I was growin’ up, breaking the Third Commandment got you a Lifebouy dinner date. True story. I never understood why anyone would give a schnizzle when I said, “God damn.” It’s not like JZeus’ Dad was gonna actually damn what the hell I wanted Him to damn. And, after all, if sticks and stones can break my bones but words would never hurt me, why would the Invisible Man in the Sky get bent out of shape over a couple of words?

Later in life, a smart man explained to me that saying God damn wasn’t taking the Lord’s name in vain but saying God told you to do something, was. Now the Third Commandment is my favorite of all the Commandments. Why? Because people can lie to me but they cannot lie to themselves and no, God Didn’t tell them to do ANYTHING! But that doesn’t stop athletes from thanking God for letting them win the big one…or actors thanking God for letting them win a Grammy…or soldiers thanking God for stopping a bullet. The latest to claim Divine intervention? Nevada’s own Sharron Angle.

Last week, the wannabe U.S. Senator from the great state of Nevada said that she’s running against Harry Reid because that’s what God has planned for her. Really? God hates Harry Reid? God is a closet Teabagger? Don’t you think if God wanted Social Security and Medicare dismantled, He could do it Himself? And why Sharron Angle? Why not just talk to the guy that is already in there? Does God think Senator Reid is incompetent? If so, why doesn’t He just zap Reid with a lightning bolt, or give him the plague or, even worse, haunt him with images of Sharron Angle? You know why? Because none of it is true. God didn’t tell Sharron Angle to run for the senate any more than he told voters to give a Grammy to Milli Vanilli. No, Sharron Angle is using God as a supernatural endorsement thinking Nevadans will believe she’s the candidate God wants in office. Maybe God wants her in office, here’s hoping Nevadan’s don’t.