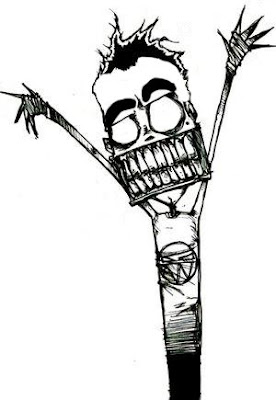 Wow, another chapter in the fiasco that is the marriage of Governor Jim and Dawn Gibbons. Every time a new story comes out about these two, it seems more fitting for the Jerry Springer Show than major metropolitan newspapers. What we don’t understand is that GJG says he’s gonna run for a second term in the State House. Huevos rancheros bro. The chances of him winning reelection are the same as our chances of getting’ some rebound poontang from Mrs. G. Yo Dawn…you know where we are, give us a holler! We can always hope, can’t we?


Defense Secretary Robert Gates says he wants to cut a bunch of unnecessary weapons systems from the Pentagon’s budget. You can bet the tighty-righties all over are getting’ their Underoos in a bunch over that one. The thing is…he’s right to do it. We’ve said it here before – WTF good is another aircraft carrier, a bunch of F-22’s or a missile defense system in fightin’ the terrorists? NONE! The only people these humongous military projects benefit are defense contractors. Anyone remember Ike’s warning about the “military-industrial complex"? We do.


There’s no getting around the fact that Guy Felton likes to cheese-off politicians. He’s been doin’ it for years. Now comes the twist. Felton has been sending some pretty nasty e-mails to Washoe County Commissioner David Humke. No, not the kinds that promise one pill that can enlarge your breasts and penis while growing you a full head of hair. Felton blasted off a couple of tirades threatening to bust some ass and that’s where Reno 911 stepped in. The PoPo arrested Felton and charged him with harassment and stalking. Here’s our beef with this one: There’s a little thingy on e-mail accounts that lets you block certain senders. So, why didn’t Humke just block Felton’s e-mail addy? Our thought is that Felton is such a turd in the Commission’s punch bowl that they wanted him tossed in the hoosegow. Question. Is that how elected officials in the 775 treat dissent? Wow, maybe America is turning into a socialist nation. Note to the Washoe County Commission: When you vote on projects, you never seem to think about the people of Northern Nevada. Why give a shit when you get an e-mail from one of ‘us?


And finally…yesterday, Vermont became the fourth state (behind Connecticut, Massachusetts and Iowa) to legalize gay marriage. That sound you hear? It’s not JZeus’ Dad making the sinners pay. It’s not the Lord’s fury unleashed at this “abomination” like Jerry Falwell would like you to believe. As far as we can tell, the Invisible Man in the Sky has been quite mum on the subject. No, that sound you hear is the collective sphincters of all the religious nut-jobs, homophobes and bible thumpers tightening to the point of rupture. Sorry guys…you lose.