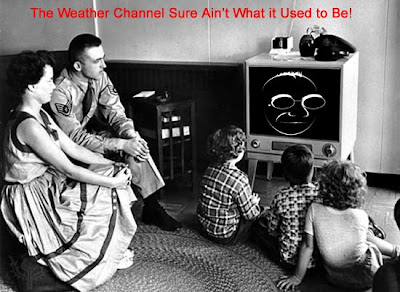 FULL DISCLOSURE: Every time you turn on your television, we here at PTB make one MILLION dollars.

For the last couple of days, RGJ/KTVN weather-dude Mike Alger has been lamenting the loss of the region’s NEXRAD radar site. Y'all know NEXRAD...it's the 21st century version of grandma's arthritic knee. Seems the little buggar was made out of toilet paper, scotch tape and bobby pins…NEXRAD…not Mike Alger or grandma. ANYWAY…


Alger tells us that the National Weather Service is getting together parts and pieces and probably won’t have NEXRAD fixed for “several weeks.” Here is the crux of today’s biscuit…


At the little T.V. station we work at, there’s an engineering department consisting of three guys whose only tools are a ball peen hammer, several rolls of duct tape and a couple of different lengths of bailing wire. When our signal goes off the air, the phone lights up like downtown Reno and people raise holy hell. “My T.V. went dark and I’m missing my stories,” shout the blue hairs. “My T.V. won’t work and I was right in the middle of watching American Idol,” say the young’uns. So our engineering boys hustle up the mountain to our transmitter and fix it with the instruments at their disposal…usually within a couple of minutes.


Question is…if the “Little Engineering Department That Could” can fix a multi-million dollar transmitter using a hair dryer, dental floss and Jello…why can’t the National Weather Service fix our NEXRAD in a timely fashion? Your guess is as good as ours but we figure that the only thing the Government-Cheese does quickly is bail out fat-cat Wall Street banker-types. The little guys? Yer on your own. Good thing we have plenty of duct tape!