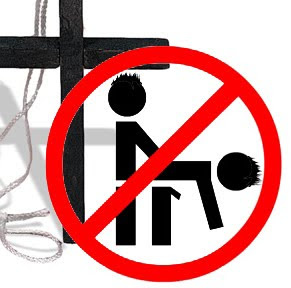 Since this weekend was a high-holy weekend, I figured it was best to hold my blasphemy ‘til afterward. Just coverin’ my ass in case JZeus’ Dad was in a pissy mood. Anyway…

Looks like the Catholic Church is in the news again. Ah yes, the gift that keeps on giving! Critics of the Church are sayin’ that the Pope knew all about the past abuse of 2,000 deaf kids and was instrumental in covering it up. Critics want JoRatz’s head on a platter but the Church fired back. PoBen’s personal preacher said the attacks on the church were akin to the persecution of the Jews back in WWII. First thing that came to my mind was…The Pope has a personal preacher? Aye caramba! Does anyone else see the irony in the fact that JZeus’ emissary on earth needs his own preacher? Secondly…blaming the media for reporting this story is like blaming the sun for your sunburn. Hey guys…take some personal responsibility, will ya? Blaming the media just makes you sound like the Teabaggers.

And lastly…If the guy covering up all this sexual abuse had been a CEO of a company or some such thing, he’d have been perp-walked to the Gray Bar Motel faster than Jesse James droppin’ his pants at a tattoo parlor. But the Pontiff’s defenders say that he’s untouchable because he’s a head of state. Funny…I thought he was untouchable ‘cause he’s the SOG’s main rep. But here’s the crux of that biscuit. Saddam Hussein, Slobodan Milosevic and Adolph Hitler were all heads of state. Now y’all remember what we did to those rat-bastards. That’s right…we JFKed ‘em. Heck-fire…we went after Slick Willie for lying about a consensual hummer. So, if JoRatz is found to have been complicit in this heinous crime…he should be prosecuted. Problem is...I’m betting no one has the huevos rancheros to do it. I KNEW I should’ve gone to law school. If it wasn’t for all the reading and words and comprehension and stuff, I would have.