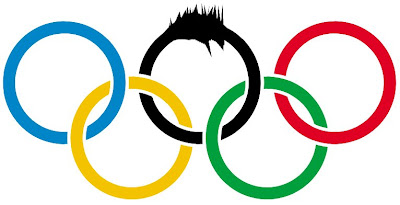 FULL DISCLOSURE: Every time you watch television, we here at PTB make one MILLION dollars.

NBC’s coverage of this year’s Olympics has been piss-poor, to put it kindly. C’mon, synchronized diving? That sport would be a LOT better crossed with skeet shooting. You gotta hit both divers before they hit the water. We’d surely watch THAT.

But the crux of today’s biscuit is simple: We get hours and hours of gymnastics, swimming, beach volleyball and yes, synchronized diving but it’s often tape-delayed and it’s never the sports we want to watch when we wanna watch ‘em. NBC.com to the rescue! We logged on the other night, checked the pull down menu and started watching stuff right away.

Now, y’all might be sayin’, “But we love watching synchronized diving.” Fair enough. But you wanna know the coolest thing about watching the Olympics on the net? No announcers, no commercials and no schedules. YEE HAW!!!

We watched hours of fencing, badminton, table tennis and horse jumping…live. And when nothing was going on live, we picked our own tape-delayed games to watch. No fluff pieces about Michael Phelps’ dog, no insipid Bob Costas-isms and no more commercials for Home Depot. It was like being in heaven. Or at the very least, like bein’ in some rocket-hottie’s bedroom, getting’ down to some canoodling.

Yup…television is on its way out and soon the net will be God. That’ll be bad for bank accounts here at PTB but it’ll be a great time watching the London Olympics in 2012. We can’t wait.
(8.-)
Posted by pj Connolly at 6:46 AM No comments: Links to this post