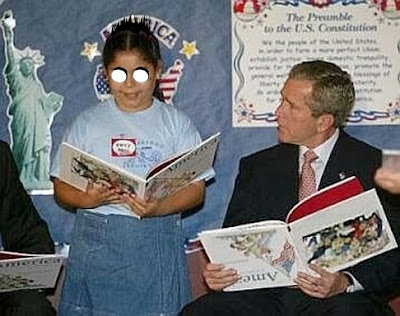 Seven years…it’s been seven years since OBL and his minions took a bite outta the Big Apple. If you were on Planet E at the time, you know exactly where you were and what you were doing when you heard the news and if you’re anything like us…you wanted vengeance. What we got were damned lies, band-aids and flag pins.


In seven years, we haven’t brought one single terrorist to justice.


In seven years, we're still not even close to catching OBL.


In seven years, the ports and borders are still unprotected from another terrorist attack.


In seven years, the best idea they could come up with on airport security was to confiscate shampoo bottles and cigarette lighters.


In seven years we’ve gone from being the shining beacon of freedom in the world to become a terrorist state in our own right…torturing, killing, lying.


In seven years, the Bush-Wipes broke the army, bankrupted the treasury, nearly wiped out the middle class, started spying on American citizens, all while looking us straight in the face and telling us what a good job they’ve been doing. POPPYCOCK.


Somewhere on the Pakistan/Afghanistan border OBL is kickin’ back in his cave, watchin’ Al Jazeera on his 52” flat-screen, sippin’ on a forty and smilin’ that smile of his. He knows he kicked our asses. Nineteen guys with boxcutters brought down the most powerful nation in the world…all with a little help from pResident George W. Bush and his ilk.

In seven years WPE has done nothing to keep us safe, he’s done nothing to prevent the next attack, he’s done nothing but try to scare the bejeezus out of us in an attempt to keep his party in power. Seven dark years of GWB in office seems like forever and it can’t get over soon enough for us. We’ve said it before, we’ll say it again. Worst. President. Ever.

Posted by pj Connolly at 12:21 PM No comments: Links to this post