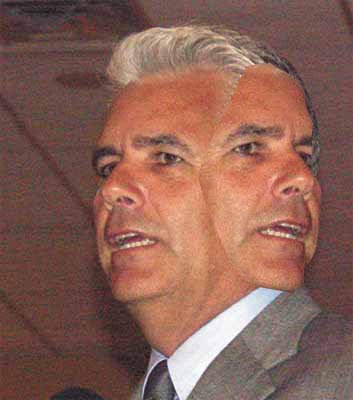 Yesterday we riffed on Senator John “The Wad” Ensign and the meanderings of his doodle. Yo Johnny…who on your staff you think JZeus would bang? Ensign has said he isn’t gonna resign from the Senate, which is bad. But things might not be in his hands, which is good.

Ya see, while Ensign is a hypocrite for horn-doggin’ the help while at the same exact time opposing same-sex marriage, that isn’t illegal. Fucked up repugnant…but perfectly legal. No, what’s gonna get “Long” John Ensign’s nutsack in a sling is the fact that he:


Doubled the pay of his paramour during the affair…


AND gave their l’il shaver more than five grand for "research policy consulting." And the kid is nineteen fuckin’ years old. Aye caramba!

No…Johnny “Trouser Trout” Ensign won’t get tossed outta the Senate for bein’ a hypocritical rat-bastard but he’ll be workin’ at the drive-thru soon enough after the feds find out about all that hush money he floated. We’ll make you a deal Senator “Able Semen” Ensign. If we ever move outta the ‘rent’s basement and get us a girlfriend, we’ll let you bang her for pennies on the dollar. Hell, we won’t even tell our gay friends. Deal?