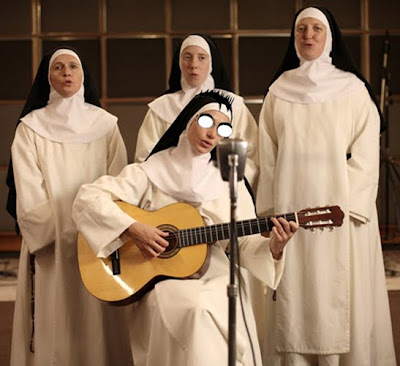 Here at PTB we surely love the Catholics. Heck-fire, without them, the only Christian denominations we could make fun of would be the Baptists…and the Mormons. That being said, this week the Vatican contends that their priestly celibacy stance is not the root cause of the sex abuse scandal. WTF? Is the Pope on drugs? Hey Ratz…listen to me now and believe me later. I agree…requiring priests be celibate did not…I repeat…did not lead to the molestation of all those millions of kids. Priests not following the celibacy order is what caused it. I mean, if you can't keep your pecker in your smock, what's the use? Funny how the more “holy” people claim to be, the more sordid and fucked up they tend to be. True story.

Finally today…ABBA, among others, is being inducted into the Rock and Roll Hall of fame today. I’ve said it before and I’ll say it again…if you have a R&RHOF and Rush is not part of that hallowed group…y’all ain’t nuthin’ but poseurs. ABBA? Fucking ABBA? Shit…those cracker-assed-Swedish-crackers wouldn’t know rock and roll if it bit ‘em on their polyester bell bottoms. No Rush = No Respect.