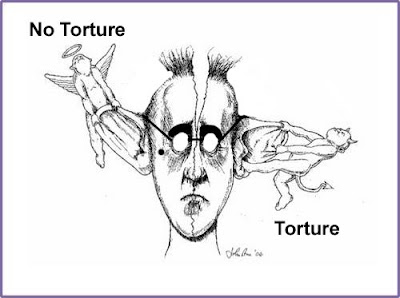 A while back, disgraced baseball slugger Mark McGwire testified before Congress about his alleged steroid usage. McGwire wussed out by saying he wanted to look forward, not backward. Way to man-up fat boy!

Last week, Dodger owner Frank McCourt was asked whether or not ManRam should be voted on to the MLB All-Star team. McCourt’s reply? He said that we shouldn’t look backward on Manny’s steroid use; we should only look forward to him coming back. Dude must’ve been a great dodgeball player in junior high.

Two excellent examples of not answering the question. And now for the shitty example…

Last week, President Obama was asked why he decided not to release pictures of prisoners, allegedly, being tortured at Guantanamo Bay. His response? You guessed it…the ‘Bamer said that releasing the pictures would be akin to looking backward while he is intent on looking forward.

Now, it’s a perfectly acceptable cop-out for a sports owner or jock-strap to dance around a question like that. But for the man elected to change the way America has been operating for the last eight years, it is an unacceptable answer. Today, Barry-O is flyin’ to the Middle East and he could go a long way in repairing our image abroad if he’d admit that America tortured detainees, if he’d admit that the wars in Iraq and Afghanistan and Iraq were/are wrong and that we will prosecute war criminals – whoever they are. Problem is, he won’t do it. The tighty-righties would crucify him if he did.

Nope…the guy they call “The Anointed One” is just another political hack, coverin’ his political ass and doin’ whatever he can to stay in political power. Americans voted for Barry-O because they wanted change. All they got was the same old excuses coming out of a different lie-hole. That’s just sad.