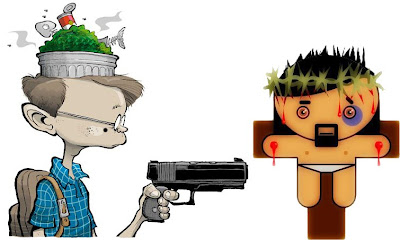 A couple of quick thoughts on the Hutaree militia…

These bass-ackward huckleberries claim that the United States has a tyrannical government they need to overthrow. Government is too big. Government is everywhere. So…if that’s what they believe, then WTF were these douchebags when Chimp-Dick was in office? NOW they think the government has grown too big? I’ve got news for you cracker-assed crackers…the government grew bigger under pResident George W. Bush than at any time since FDR and the New Deal. True story. But were the Hutarees clamoring for Bush’s head on a platter then? No. Oh yeah…and since y’all hate the government so much how the hell come you’ve all requested government appointed lawyers to defend you? That makes the Hutarees hypocrites, pure and simple.

And one more hypocritical angle to this clusterfuck of a story. The Hutarees claim that they are Christian warriors. O.K., I’ll give ‘em that. But if that’s the case, why do they need guns? Can’t they just pray to the Son of the Invisible Man in the Sky to smite their enemies? From what I’ve read, JZeus’ Dad was one pissed off old man. One word from His followers and the entire USo’A, Inc would be covered in a plague of locusts or frogs. Don’t they even believe in the power of their own God? Guess not.

Posted by pj Connolly at 12:09 PM No comments: Links to this post