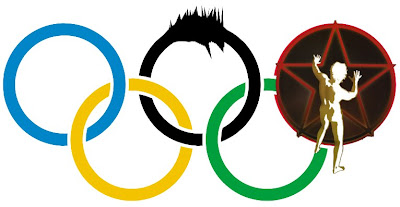 Except for the two hours of Nevada’s basketball game last night, I’m lovin’ me some Winter Olympics. Yup, that Shaun White surely tore up the half pipe. That dude can flat-out fly! So in honor of monsieur White’s accomplishments and knowing he hates the nickname “Flying Tomato,” PTB is gonna drop a couple of new ones – “White Out” or “The Red Baron.” All yours bro! Congrats.

As you may have noticed, the 775 has quite a few athletes in these games. Yesterday, one of our girls, Julia Mancuso, got a silver in the women’s downhill. WAY TO GO JULES! So I’m watchin’ her run last night with a barley pop and out of the announcer’s pie hole came, “It’s a tough course out there but Mancuso likes it rough and bumpy.” Insert one beer-filled spit-take and high comedy reigned supreme.

Has anyone else noticed the Olympic promo starring Rascal Flats? The country (AND western) trio are belting out one of their tunes to video of Johnny Weir bein’ flamboyantly gay and a bunch of hockey dudes hugging each other. The dichotomy of the music and the video is a classic example of unintentional comedy in its highest form.

And lastly…all over this Olympic coverage I hear announcers talk about the many cool and awesome things that belong to Canada. Mounties… Molson…and Wayne Gretzky to name three. But in all the coverage I’ve watched, not once has an announcer mentioned Geddy Lee, Alex Lifeson or Neil Peart, collectively known as Rush. Longtime readers of PTB know we’re big Rush fans and it’s disappointing not to hear any mention of one of the greatest rock bands ever …who also happen to be from CANADA! I wonder if skeevy Bob Costas or any of the other myriad announcers and production crew even know what they’re missing? They might not…but I do.


Posted by pj Connolly at 12:18 PM No comments: Links to this post