Out With the Old and In With the New...PLEASE!

The 00’s rolled in with the Republicans bitching and moaning about hanging chads and how their boy the Bush-Wipe won. Stormin’ the Florida recount like they were Uncle Adolph’s jackbooted thugs.

And now the 10’s roll in and it’s pretty much the same.

I was gonna spend lots and Lots and LOTS of time today rambling on about what a mess Chimp-Dick made out of things but I wanna keep things light. Today, I just wanna kick this fucked up decade to the curb and start a new one. After all, it can't be as bad as the last one. Can it?

Up Up and Away 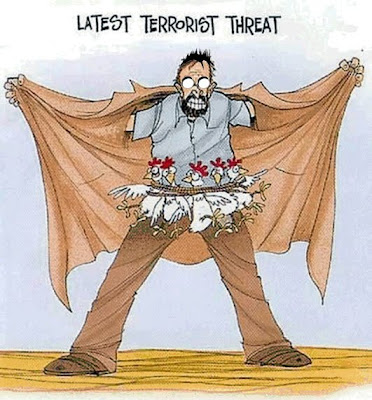 It never ceases to amaze me what dumb-assed pussies Americans are. As you know, earlier this week, some BSC motherhubbard tried to set off an explosive device in his pants while he was flying to Detroit. Aye caramba, dude. Talk about one painful brit milah. No worries, though. Passengers on the plane saw what was happening and gave the rat-bastard the American version of the Glasgow kiss. They shoulda tossed him out the door but, instead, they detained him ‘til landing. The dude got perp-walked and now he’s in the Gray Bar Motel.

Tighty-righties, tinfoil hat wearin’ loonies and teabaggers alike had collective conniptions. “Obama is soft on terror,” they said. “We need more security at airports,” they whined. And on…and on…and on. Here’s what they don’t get: Airplanes, in the first place, aren’t totally safe. If God had wanted man to fly, he’d have given him some sort of wing-like appendage. Secondly, airports and airplanes should be the least of our worries. Why?

Americans have this pompous sense of superiority over peoples of other nations. “We’re smarter, we’re better, and by golly, we love ourselves,” we say. And that’s the problem. While Dick “Dr. Evil” Cheney and Tom “Over the” Ridge and their ilk piss and moan about airport security, the REAL terrorists are planning their next attack and it isn’t gonna be in an airport or on a plane. Too much security…too much hassle….been there, done that. No, terrorists hit you where you’re most vulnerable and when you least expect it. That’s why they call it terrorism.

So, while republican hacks try to score points with the voting public by vilifying Janet Napolitano and Barry-O and scaring the bejeezus out of the flying American public, the bad guys are gonna pop us while we’re not looking. It might be in a shopping mall, it might be on a bus or a train. But it won't be at an airport…because that’s exactly where we expect them to be. SHEESH! Americans…we think we’re so smart. Too bad we’re not.

A Turd in the Hawaii Punch Bowl 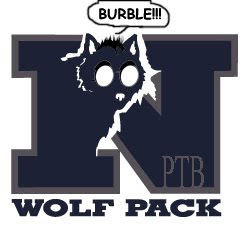 Nothing was gonna get in my way of watchin’ play the SMU on Christmas Eve. Not the smell of gingerbread wafting from next door…not the sound of carolers in the front yard…not even the beginning of “A Christmas Story” marathon…nothing was gonna get in the way of this game. So I settled in front of my television with 24 of my closest friends and waited for kickoff. Too bad there wasn’t a power outage or a meteor strike because the ensuing three hours were more painful than any Barry Manilow concert could ever be.

What a fustication. What an embarrassment. 45-10…WTF is up with that? From the start Nevada looked listless. It was a flashback to the old “One Yard and a Cloud of Dust” offense that Chris Ault so readily rolls out at Bowl time. SHEESH!

The game was such a blowout that I started in with drinking games. Nevada three and out? Drink. SMU touchdown? Consumo. Nevada turnover? Pound one. And on…and on…and on. By the time the fourth quarter had started, the beer was all gone and I had to switch to my celebratory, high falutin’ tequila that brother Sal brought back from Mexico. YIKES!

My head was buzzing like a hive of angry bees by the time the game was over. Questions punctuated with alcohol burps. How could this happen? Burp. WTF was the coaching staff thinking? Burp. How can a team not be geared up for a bowl game in friggin’ Hawaii? BURPFFFT. Aye caramba!

The whole thing left me with a headache and a spastic colon for the next few days. But between throbs and burbles, one question kept popping up…WTH do we do now? Two straight years the Wolf Pack has gone to a bowl game only to be beaten like a rented mule. It’s starting to border on the absurd.

Last week the RGJ asked the question: “What would it take for Nevada to be like Boise State in football? My answer…nothing. For the last decade or so, Boise State has been a monster of a program. They play the big boys whenever they can and usually end up beating them. They play in big-time bowl games against top-notch opponents. Nevada? We play schools like Grambling State and the University of Northeastern Canada and we squeak by. Play a big school like Notre dame or Missouri? We get stomped like Michael Flately’s dance floor.

No, Nevada’s glory days are long gone and it doesn’t look like they’re gonna get better anytime soon. But there is good news Wolf Pack fans…if you have the creativity, there is no end to the drinking games you could play while Nevada is on the field. Just be careful. That’s a lot of alcohol for a three hour game. True dat.


Here's the third part of PTB's Christmas Extravaganza. As you can tell...here at PTB we love us some Rudolph.

For all you Christmasochists out there suffering from Santaclaustrophobia...Number two is for you (and no, I don't mean doo doo). True dat. Enjoy.

Growin' up, one of my all-time favorite cartoons was Rudolph the Red Nosed Reindeer. The Bumble used to scare the bejeezus outta me but every Christmas I'd watch anyway. So, in the spirit of the holiday season, all this week we're gonna give you some of the funniest riffs on Rudolph you're ever gonna see. Enjoy. 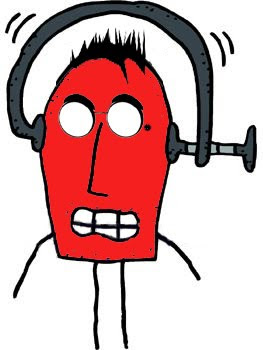 Eighty-four years ago today, Billy Mitchell was court-martialed for telling his superiors what he knew in his heart to be true. The airplane was here to stay…it was going to revolutionize the development of the world and the world’s armies and his superiors were pompous douchebags who wouldn’t (or couldn’t) see that obvious fact. Even back in the day it wasn’t a good idea to piss off your boss. Mitchell got demoted and eventually resigned from the U.S. armed services. Too bad. Sixteen years later the Japanese proved him right by bombing the bejeezus out of Pearl Harbor. So much for “I told ya so’s.”

But that’s why Mitchell will always have a place in my heart. Ya see B-Mitch was the kind of guy who could see the future without taking his eye off the present while remembering the lessons of the past. And he wasn’t reticent about his thoughts. He called ‘em like he saw ‘em and more often than not he was right. Alas…we’ve got nothin’ like that now and we sorely need it.

Afghanistan…Pakistan…Iraq…Iran…North Korea…the economy…the insurance and banking cartels…tinfoil hat wearin’ teabaggers…homegrown terrorists…torture…Gitmo...healthcare...the national debt. There are a million December 7ths out there and no one sees ‘em coming. Wish you were here General Mitchell...we could use someone like you. Problem is, if you were, you’d still be vilified and December 7th would still be on the way. True dat. 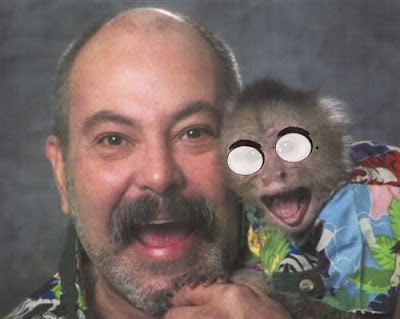 Italian PM Silvio Berlusconi got creamed a couple of days ago when a BSC motherhubbard tossed a marble statue that hit him square in the mug. YOUCH! But am I the only one in the world who saw that story and instantly thought, “Why couldn’t the Iraqi shoe dude been that accurate?”

As the healthcare debate rambles through the Senate I got to thinking. Do you know anyone, that doesn’t have healthcare, who is against reform and a public option? I didn’t think so. Seems like the only people against healthcare reform are the ones who already have health insurance.

An new study, just released by the Census Bureau, says that by 2050 whites won’t make up the majority of citizens in the USo’A. If you go outside sometime today, cup your hand to your ear and listen very closely. That funny sound? That’s the sound of Lou Dobbs’ sphincter crushing a lump of coal into the world’s most perfect diamond. True dat. 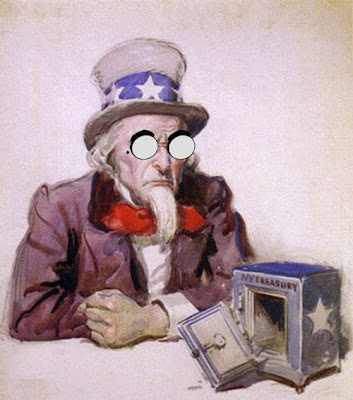 Nevada, like a lot of states, has had a hard time this year balancing the budget. To help the situation there have been layoffs and furloughs and pay cuts given to state employees. Problem is, the douchebag politicians running the joint didn’t think their pay warranted any cuts. That is, until now. Last week Assemblyman Ed Goedhart, R-Amargosa Valley, cut a check to the NV for $526.65. That represented a six percent pay cut. While y’all might think this is gonna be a feel-good piece about Assemblyman Ed, you’d be wrong.

Several representatives, when asked why they didn’t buck up like the rest of us, said that they don’t make enough money in the first place and that cutting nothing from nothing was stupid. Fair enough. But just how much “nothing” do these government-cheese dicks get? Well, I did the math (hey…no jokes).

It turns out Nevada State Legislators make a flat $8,777 dollars for every 60 day session. Since sessions always run 120 days, they still make $8,777. Now eight grand for four months’ work isn’t very much but when you consider that NV Reps also get a $167 daily per diem for the full 120 days and are reimbursed for travel, lodging and moving expenses, things start to add up. Let’s see…167 x $120 = $20,040. Add in the eight grand and the total swells to $28,817 not including travel, lodging and moving expenses.

So, Nevada Legislators like Senator Barbara Cegavske and Assembly Majority Leader John Oceguera get almost thirty grand for four month’s work, PLUS travel, lodging and moving money AND the prestige of being a big-time politician and they think that 30G’s isn’t a lot of scratch. SHEESH! Listen up douchebags...if you don't like the pay, don't run for office. It's called public service for a reason. But we can only blame ourselves, folks. We voted these chucklenuts into office. Here’s hoping we all remember this post next election time and vote the rat-bastards out. All except Assemblyman Ed. That brotherhubbard should run for governor. True dat.