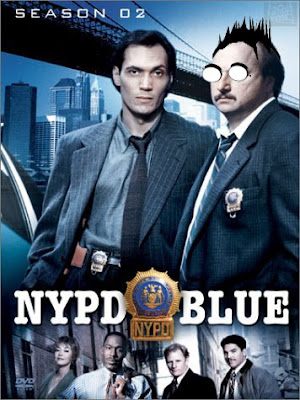 Hot diggety damned! Didja hear? PoPo in the Big Apple went and caught themselves four terrorists. They busted the rat-bastards yesterday and today they’ve got ‘em in court. HUZZAH!

NYPD Blue didn’t torture anyone to get information.


They didn’t kill any civilians in the process of the arrest.


They didn’t need Halliburton,
or KBR,
or Blackwater,
or a predator drone,
or fuckin’ Lynndie England to get the bad guys…

Now these recent converts to Islam are gonna get their day in court, then soon get plenty of time in the Gray Bar Motel to study the Koran. They’ll need it.

You see, just like Christianity and Judaism, Islam is a religion of peace. And just like Christianity and Judaism, there are BSC motherhubbards spewing hate outta their lie-holes claiming to do it for God, or Yahweh, or Allah, or Jesus. If these chuckle-headed wannabes had actually studied about their newly found religion, they wouldn’t be out tryin’ to blow people up. How do a bunch of bass-ackward, crazy, bald-headed, cracker assed crackers from the 775 know? ‘Cause we can read…

Chapter 3, verse 172, of the Quran: "Of those who answered the call of Allah and the messenger, even after being wounded, those who do right and refrain from wrong have a great reward."