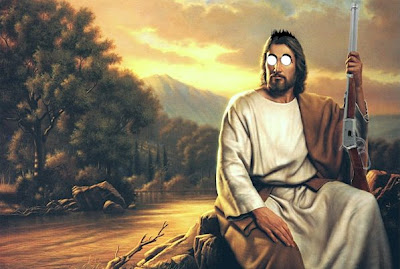 One of the sacred cows we love skewering here at PTB is religion. Not necessarily religion in and of itself, but the inevitable hypocrisy that goes with it. Think about it: How many Christians here in the USo’A wanted revenge after 9/11? More than you’d think. If that isn’t hypocrisy, what is?

The latest in the line of “Do what we say, not what we do” is Islam. Last month at the United Nations a group of 57 countries entered a resolution. The resolution said that offending Islamic sensitivities is a “serious affront to human dignity” which could lead to “social disharmony”, “violations of human rights” and “incitement to religious hatred in general and against Islam in particular.” Is that so? Gandhi once said, “A religion that takes no account of practical affairs and does not help to solve them is no religion.” Uh oh, did Gandhi just piss off the entire Muslim world? Aye Caramba!
Does Islam prove Gandhi right? What they’re doing here isn't solving problems or practical affairs...they're shielding their religious ideas and teachings from criticism or debate. So we’re gonna take on this magilla head on…just like you knew we would.

Serious affronts to human dignity? Ask any Muslim woman how that fuckin’ Burqa feels in the middle of a Saudi summer.

Social disharmony? Ask the ruling Mullahs of Iran what they do to “infidels” in their country.

Violations of human rights? Ask the Muslim killers of Daniel Pearl what human rights are.

Incitement to religious hatred? How many Muslims have Jewish friends or relatives? How many Catholics or Baptists or Mormons live and work in Afghanistan, or Pakistan, or Qatar? ZERO. So the next time Islam wants us to tone down the rhetoric, we’re gonna drop trou and shake our pink asses in their general direction. Now that would offend anyone.
(8.-)
Posted by pj Connolly at 12:46 PM No comments: Links to this post