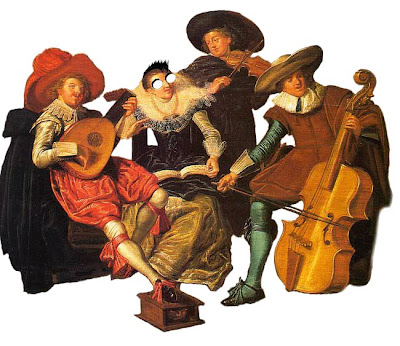 Several artists have hooked up in protest ‘cause their music is being used to torture prisoners at Gitmo. We can understand that playing tunes with the volume cranked to 11 amounts to physical torture. You could really get a couple of eardrums a ringin’ if you go loud enough. What worries us here at PTB is Gitmo’s pick in torture music. Ya think any of those poor brown-skinded brotherhubbards speak English? No. So it really doesn’t matter what the lyrics of the song are, just how loud you play it. The bands they favor…Nine Inch Nails, AC/DC, Rage Against the Machine and Pantera we can understand. They’re all oogity boogity metal bands. Ooo…scary. But Queen? Are they serious? You’d have to crank Fat Bottomed Girls pretty loud to make that scary. What’d really scare the beJZeus out of the bad guys would be to show ‘em a video of Queen with Freddie Mercury all dressed to the hilt. Aye caramba!

Death metal is getting a bad name here, so we thought long and hard about other music that could be used for torture…

Anything by Wagner or Beethoven. Before scary movies, that was the stuff that gave folks nightmares.

Five of the scariest words ever uttered in song: and the Chipmunks. That’s worse than waterboarding!

But our favorite? The Shaggs. One of their best is My Pal Foot Foot. CAUTION: “Listening to the Shaggs may result in space dementia, Stevie Wonder-vision, Captain Quint breath, Charlie Brown head or Blagojevichitis.